Military Order of the Purple Heart

The History of the Purple Heart 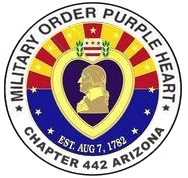 The Purple Heart is awarded to members of the armed forces of the U.S. who are wounded by an instrument of war in the hands of the enemy, and posthumously to the next of kin in the name of those killed in action or those who died of wounds received in action.  It is specifically a combat decoration.

The Purple Heart is an American decoration-the oldest military decoration in the world in present  use and the first American award made available to the common soldier.  It was initially created as the Badge of Military Merit by one of the world's most  famed and best-loved heroes-General George Washington.  General Washington is often pictured as a cold, stern soldier, a proud aristocrat. Yet we know he showed sympathy and concern for his troops, and was not too proud to pray humbly on his knees for his beloved country and for the men who served it, and him, so bravely and loyally.  His keen appreciation of the importance of the common soldier in any campaign impelled him to recognize outstanding valor and merit by granting a commission or an advance in rank to deserving individuals.  In the summer of 1782 he was ordered by the Continental Congress to cease doing so.  There were no funds to pay the  soldiers, much less the officers! Deprived of his usual means of reward, he must have searched for a substitute. Shortly after receiving the "stop" order from Congress, he wrote his memorable General Orders of August 7, 1782, which read in part as follows:

"The General, ever desirous to cherish virtuous ambition in his soldiers as well as foster and encourage every species of military merit, directs that whenever any singularly meritorious action is performed, the author of it shall be permitted to wear on his facings, over his left breast, the figure of a heart in purple cloth or silk edged with narrow lace or binding. Not only instances of unusual gallantry but also of extraordinary fidelity and essential service in any way shall meet with due reward. The name and regiment of the persons so certified are to be enrolled in a Book of Merit which shall be kept in the orderly room." The order further states: "Men who have merited this distinction to be suffered to pass all guards and sentinels which officers are permitted to do. The order to be retroactive to the earliest stages of the war, and to be a permanent one." Washington ended his order with: "The road to glory in a patriot army and a free country is thus open to all."

Although general Washington intended the forerunner of today’s Purple Heart to be bestowed “whenever any singular meritorious action is performed,” only three soldiers of the American Revolution were awarded this medal.  Sergeant Elijah Churchill, 2nd Regiment, Light Dragoons, was awarded the Badge for his part in two successful raids behind enemy lines.  In November 1780, leading only 16 men,  he was able to capture and destroy the heavily manned British fortifications at Corum, New York.  Not only did they burn 300 tons of hay, they also burned a British schooner and captured 50 prisoners.  The second raid was on Fort Slongo in October 1781, Churchill’s unit, without the loss of a single man, captured and destroyed the fort in less than 24 hours.

The badge was awarded to Sergeant William brown, 5th Connecticut Regiment, for leading an advance party who, using only bayonets, penetrated the British fortifications at yorktown, Virginia on October 14, 1781.  Although challenged by enemy gunfire and grenades, Brown’s unit drove the British from their positions in only 15 minutes.

The last badge was awarded to Sergeant Daniel Bissell, 2nd Connecticut regiment, for masquerading as a British soldier from August 1781 to September 1782.  The information he gathered helped prepare for the American-French attack on the City of New York.

With the American Revolution over and the Army disbanded, the Badge of Military Merit passed into history until February 22, 1932, the 200th anniversary of Washington’s birth.

The U.S. War Department revived the Purple Heart decoration on February 22, 1932.  On that date, General Douglas MacArthur, then War department chief of Staff, announced the restoration of the Purple Heart for use by the United states Army.

Elizabeth Will of the Office of the Quartermaster General is credited with the 1932 design of the medal.  The revived form  of the Purple Heart is of metal, instead of perishable cloth, made in the shape of a rich purple heart bordered with gold, with a bust of Washington in the center and the Washington coat-of-arms at the top.  The Washington coat-of-arms is believed to have been the source of the stars and stripes of the American Flag.

The PURPLE HEART is awarded to members of the armed forces of the U.S. who are wounded by an instrument of war in the hands of the enemy and posthumously to the next of kin in the name of those who are killed in action or die of wounds received in action. It is specifically a combat decoration.

An organization now known as the "Military Order of the Purple Heart," was formed in 1932 for the protection and mutual interest of all who have received the decoration.  Composed exclusively of Purple Heart recipients, it is the only veterans service organization comprised strictly of "combat" veterans.